Humanoid robots in the future will have to live together with humans, and be able to do the same actions. While robots are fine with vision, hearing or even touch, it will soon become necessary for robots to also be able to smell and taste.

There hasn’t been sensors that allow robots to smell up to this point, and as such we then began to think about the easiest way to allow them to sense smells. After realizing that using existing sensors was insufficient, we decided to create an organic sensor instead.

Here, we developped a highly sensitive and selective chemical sensor using living cells (Xenopus laevis oocytes) within a portable fluidic device. We constructed an odorant sensor whose sensitivity is a few parts per billion in solution and can simultaneously distinguish
different types of chemicals that have only a slight difference in double bond isomerism or functional group such as ─OH and ─CHO. We developed a semiautomatic method to install cells to the fluidic device and achieved stable and reproducible odorant sensing. In addition, we found that the sensor worked for multiple-target chemicals and can be integrated with a robotic system without any noise reduction systems. Our developed sensor is compact and easy to replace in the system. We believe that the sensor can potentially be incorporated into a portable system for monitoring environmental and physical conditions.

Controlling the shape of filamentous cells of Escherichia coli 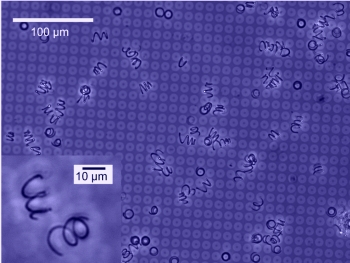 This paper describes a technique for growing filamentous cells of Escherichia coli with defined shapes, including crescents, zigzags, sinusoids, and spirals. The procedure begins with the fabrication of embossed microchambers in agarose. Cells are trapped in the chambers by placing a flat, flexible “ceiling”, either a slab of agarose or poly(dimethylsiloxane), against an agarose mold on which a suspension of cells has been added; the use of agarose keeps cells hydrated and allows nutrients to diffuse into the chambers. Cells grown in microchambers in the presence of cephalexin grow into a multinucleate, nonseptate, filamentous phenotype and adopt the shape of the microchambers. The resulting cells are motile and can be released by removing the “ceiling” from the agarose microchambers and rinsing the cells into solution. 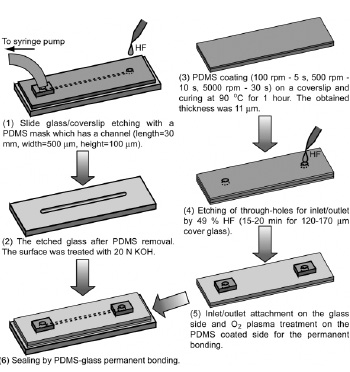 Optically-flat glass channels were fabricated for the non-fluorescent observation of bio-molecules. Two bioassays of motor proteins were successfully performed, in which nanoscale beads and microtubules were clearly observed by a differential interference contrast (DIC) microscope and a dark-field microscope, respectively. The concentration of hydrofluoric acid (HF) was optimized to obtain an optically flat surface which was evaluated by AFM, SEM and dark-field microscopy. A glass channel was etched using a poly(dimethyl siloxane)(PDMS) microfluidic channel as a mask and sealed with a PDMS-coated coverslip. The channel volume of 2-3 microl realized the drastic reduction of proteins required per assay compared with a conventional flow cell method requiring 20 microl. 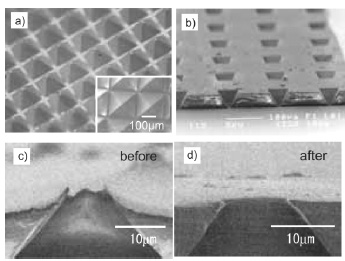 We propose a novel technique for patterning active proteins on a glass substrate using a perforated polydimethylsiloxane (PDMS) sheet-sieve. The sieve, which has tapering holes, is fabricated by spin-coating PDMS on a pyramidal-shaped mold. By means of this sieve, FITC (fluorescent isothiocyanate, bovine)-albumin was successfully spotted in a 5 x 5 microm(2) area in an array. The patterned spots were perfectly isolated, which eliminates the problem of non-specific binding of proteins to undesired areas. To show that proteins maintained their activity after the patterning, we used F(1)-ATPase biomolecular motors; their activity can easily be verified by observing their rotary motion after patterning. Selective patterning with three kinds of fluorescent micro beads indicated the possibility of patterning of different proteins on the same substrate by using the sieve. 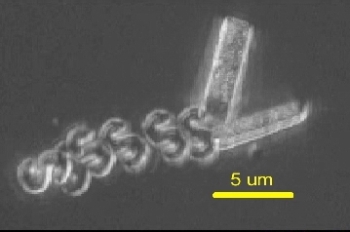 We have demonstrated a novel micro/nanotransport system using biomolecular motors driven by adenosine triphosphate (ATP). For the driving mechanism, microtubule-kinesin system, which is one of the linear biomolecular motor systems was investigated. ATP dissolved in an aqueous condition is hydrolyzed to adenosine diphosphate (ADP) to energize the bionanoactuators in this mechanism. This means the system does not require an external electrical or mechanical energy source. Therefore, a purely chemical system which is similar to the in vivo transport will be realized. This paper reports some fundamental studies to integrate biomaterials and MEMS. The microtubules, or rail molecules, were patterned on a glass substrate with poly(dimethyl siloxane) (PDMS) using a regular soft lithography technique. Microbeads (320 nm in diameter) and a micromachined structure coated with kinesin molecules were transported along the microtubules. While ATP injection activated the transport system we have also managed to provide repetitive on/off control using hexokinase as an inhibitor. [Download the movie]